Lewis Ben Smith’s many friends describe him as a man of numerous talents, and with good reason. 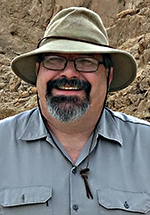 As much at home behind the pulpit as he is in his classroom, where he teaches history to students of six different grades, Lewis also loves walking down ancient riverbeds seeking to add to his museum-like collection of stone artifacts left behind by Texas’ ancient inhabitants. He has even helped excavate the fossilized remains of a Mosasaur, a type of marine dinosaur that roamed the shallow seas that once covered his neck of the woods more than 70,000,000 years ago.

A true son of the Lone Star state with Texas roots that go back six generations, Lewis was born in the heart of Texas on December 13, 1963, and graduated from Ford High School in Quinlan in 1982.He is the father of daughters, Rachel and Rebecca, husband since 1984 to love of his life, Patty.

A veteran of four years in the US Navy during the Cold War, as a radioman with a top secret clearance, Lewis was involved in the USS Lockwood incident in December 1985, when the frigate on which Lewis was serving collided with a Filipino freighter near Yokosuka, Japan. 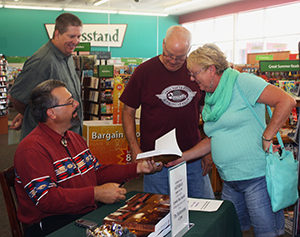 After serving his country, Lewis attended East Texas State University, from which he received his BA in 1990, and his Master’s in 1993. He is now in his third decade teaching history at Greenville Christian School, northeast of Dallas. Every spring as graduation draws near, Lewis takes occasion to hand-write a personalized letter to each senior, reflecting on their time together, and gifting each with a flint arrowhead, as an enduring token of affection toward the students who have passed through his classroom.

A voracious lifelong reader, Lewis saw his thrilling debut novel, The Testimonium, released by eLectio Publishing in the summer of 2014. 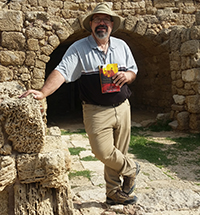 It was soon followed in the spring of 2015 by a historical title, The Redemption of Pontius Pilate, and then another modern archaeological mystery, Matthew’s Autograph, published that same autumn. Theophilus, which covers much of the Roman world in New Testament times, came out in 2017, and most recently his fifth novel The Gnostic Library, which sets its cast of archaeologists down amid the turmoil of present-day Egypt, hit bookshelves in May 2018.

Lewis loves the craft of writing and describes it as his mission “….to create fun stories that express a more accurate view of the origins of Christianity than do many popular works of fiction.”

Be that as it may, readers from all backgrounds have become fans of his fast-paced novels, that span the globe and step back and forth across time, seamlessly incorporating his own characters and historical figures alike.

Archeologist, pastor, teacher, third-degree black belt, world traveler, all-around nice guy, and of course novelist, Lewis Ben Smith is truly a man of broad experiences, but the title closest to his heart is one he has held proudly since childhood: follower of Jesus Christ.