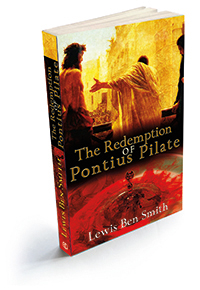 Any any man too lost to be saved?

Lucius Pontius Pilate was a Roman on the rise – an ambitious nobleman serving with ruthless efficiency as a confidential agent of the Emperor Tiberius Caesar.  A respected member of the Roman Senate, Pilate harbored a cruel streak that Tiberius uses to strike fear into the hearts of the Empire’s enemies.

With the Emperor's patronage, Pilate ascended to the peak of Roman society - but then a disastrous encounter with Tiberius' young heir, the psychotic Gaius Caligula,  resulted in Pilate's disgraces exile - sent as Prefect to the armpit of the Roman Empire: the Province of Judea.

In this desert land, where religious fanaticism and political rebellion bloomed like flowers in the spring, Pilate’s life becomes entwined with that of Jesus of Nazareth, the enigmatic leader of a new religious sect.  Pressured into sending Jesus to the cross by local religious leaders, Pilate is tormented with guilt, unable to wash away the blood on his hands.

When the sudden death of Tiberius elevates Caligula to the Imperial throne, Pilate has no choice but to flee for refuge to the disciples of the Man he crucified. The question is, will they accept him?